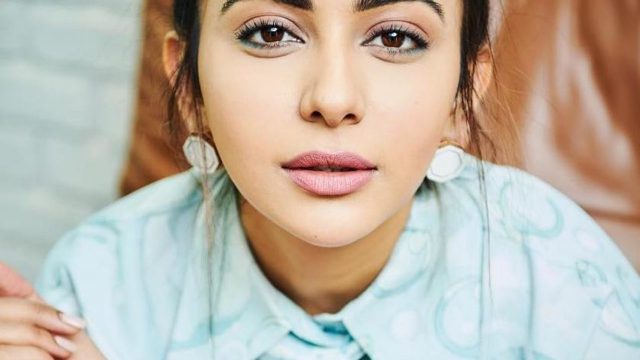 Rakul Preet Singh’s height and other measurements are visible in the table below. Check it out!

Rakul Preet Singh is an Indian actress and model, active primarily in Tamil and Telugu films. And also appeared in Hindi and Kannada films. Her notable film appearances include: Venkatadri Express, Rough, Loukyam, Bruce Lee, Spyder, Rarandoi Veduka Chudham, Current Theega, Nannaku Prematho, Sarrainodu, Kick 2, Jaya Janaki Nayaka, Theeran Adhigaaram Ondru, and Dhruva. In 2011, she competed in the Miss India beauty pageant, where she was placed 5th and won five pageant titles including ‘Miss India People’s Choice’. She has been appointed as the brand ambassador for Beti Bachao, Beti Padhao programme by Telangana State Government. Born on October 10, 1990 in New Delhi, India, to parents Kulwinder and Rajender Singh, she has one brother named Aman. She completed her schooling from Army Public School in Dhaula Kuan and later on completed her Honors’ Degree in Mathematics from Jesus and Mary College, University of Delhi. She began her career as a model while she was in college and did several commercial flyers. She debuted as Arati in the 2009 Kannada film, Gilli.

A lot of people don’t know that I had a special appearance in ‘Keratam’; that was my first Telugu film. I only shot for four to five days. When they called me, I said, ‘I can’t give 60 days for a movie. If you have something for one week or 10 days, then I can accommodate.’

There’s competition at every phase of your life. The day we start thinking about it, you lose your peace of mind. I don’t compete with anyone.

For me, fitness is not just about hitting the gym; it is also about an inner happiness and an overall well-being.

We are in a world where men and women are on the same platform.

I consider Rashi Khanna and Regina Cassandra as my best friends. They say there are three Rs in the Telugu industry: Rakul, Rashi, and Regina. All three of us debuted in the same year, and while we all compete for the same roles, we are still the closest, and we confide in each other.