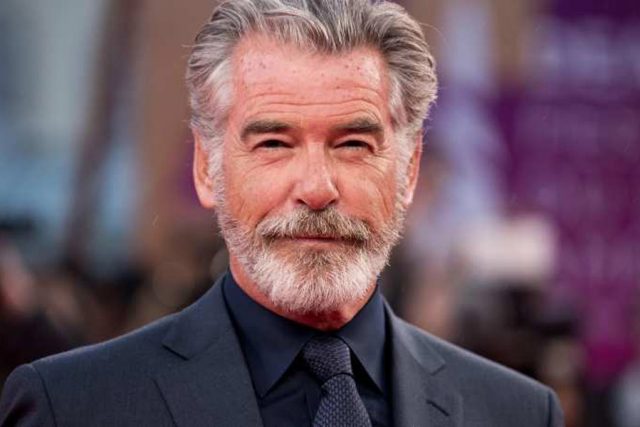 Pierce Brosnan’s shoe size and other measurements are visible in the table below. Check it out!

Pierce Brosnan is an Irish-American actor who played James Bond in four Eon Production films GoldenEye, Tomorrow Never Dies, The World Is Not Enough and Die Another Day. His other notable film appearances include: Peak, The Thomas Crown Affair, Mamma Mia!, The Matador, Percy Jackson & the Olympians: The Lightning Thief, Mrs. Doubtfire, The Ghost Writer, Love Is All You Need, The Fourth Protocol, and the action spy thriller The November Man. His television credits include Remington Steele, Noble House, Manions of America, Around the World in 80 Days, Bag of Bones, and The Son. Born Pierce Brendan Brosnan on May 16, 1953 in Drogheda, County Louth, Ireland, to parents May (Smith), a nurse, and Thomas Brosnan, a carpenter, he was raised Catholic. He attended Elliott Comprehensive School, Putney, in the 1960s and started his career as an acting assistant stage manager at the York Theatre Royal. He made his film debut as Edward O’Grady in the TV movie Murphy’s Stroke (1979). Brosnan rose to prominence after appearing in the television series Remington Steele (1982–1987). He has been married to Keely Shaye Smith since August 4, 2001. He was previously married to Cassandra Harris. He has four sons named Sean, Paris, Christopher and Dylan and a daughter named Charlotte.

Dark comedy is very difficult. You have to bring the audience in and push them away at the same time.

My religious philosophy is kindness. Try to be kind. That’s something worth achieving.

It’s the ultimate goal every day you wake up, to be happy. At the end of the week, you want to be happy. Happy in love, happy in work, happy in life, happy with yourself. It’s pretty simple.

Love means that everything is right with the world. Love and only love. Love means that you are content within your own heart and in the presence of the person that you love, who fills your day and makes you stronger and wiser, and gives you the confidence to go out into the world. Love is just the most beautiful, joyous feeling.

I like dressing in all seasons. Every season has its own character and charm.