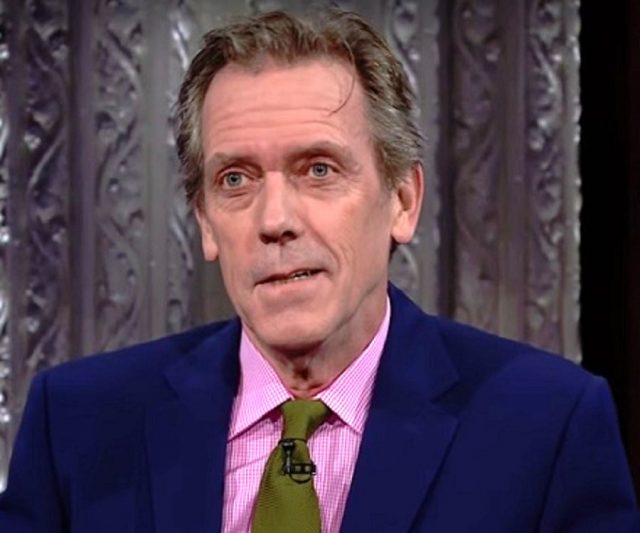 Hugh Laurie’s height and other measurements are visible in the table below. Check it out!

Hugh Laurie is a British actor, comedian, singer, musician, director and writer. He is best known for his portrayal of Dr. Gregory House on the Fox medical drama series House, and for his role as Mr. Frederick Little in Stuart Little and Stuart Little 2. He played Senator Tom James in the HBO sitcom Veep, for which he received his 10th Emmy Award nomination. Other notable acting roles include The Night Manager, Tomorrowland, Catch-22, Blackadder, Sense and Sensibility, 101 Dalmatians, and The Borrowers. In April 2011, Hugh released his debut studio album, Let Them Talk. Born James Hugh Calum Laurie on June 11, 1959 in Blackbird Leys, Oxford, United Kingdom, to parents Patricia (née Laidlaw) and William George Ranald Mundell “Ran” Laurie, he is of Scottish descent. He attended Dragon School and Eton College and received his Third-Class Honours degree in anthropology and archaeology at Selwyn College, Cambridge University. Hugh first appeared in the 1985 British drama movie Plenty as Michael. He has been married to Joanne Green since June 16, 1989. They have two sons, Charles and Bill, and daughter Rebecca.

I was too shy, I think, to sing publicly. It takes a particular kind of person. And when I was young, I was not that person. In the first instance, when a record company said to me, do you want to try and make your record, my first reaction was, no, I’m not worthy – I couldn’t possibly, and so on and so forth.

I get anxious about a lot of things, that’s the trouble. I get anxious about everything. I just can’t stop thinking about things all the time. And here’s the really destructive part – it’s always retrospective. I waste time thinking of what I should have said or done.

Riding my motorcycle around L.A. is like my own video game. But unlike many folks at the wheel, I am occupied with getting where I’m going and keeping myself safe. Most people are applying makeup, texting, and checking out the beauty in the next car.

Humility was considered a great virtue in my family household. No show of complacency or self-satisfaction was ever tolerated. Patting yourself on the back was definitely not encouraged, and pleasure or pride would be punishable by death.

I have my moments. Ever since I was a boy, I never was someone who was at ease with happiness. Too often I embrace introspection and self-doubt. I wish I could embrace the good things.