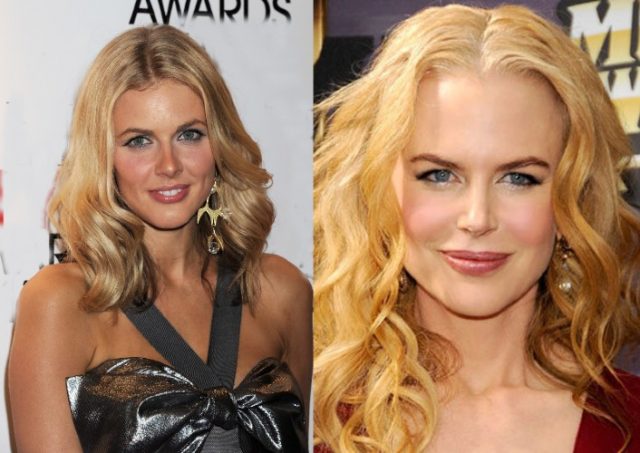 Donna Air’s shoe size and other measurements are visible in the table below. Check it out!

Donna Air is a British actress and television personality who hosted The Big Breakfast for Channel 4, TFI Friday with Huey Morgan and Popstars: The Rivals Extra for ITV. She has appeared in films such as The Mummy Returns, Still Crazy, and Bad Day, and the television series Hollyoaks and Hotel Babylon, BBC TV comedy Operation Good Guys, Catherine Cookson’s six-parter A Dinner of Herbs, and Lynda La Plante’s Supply and Demand. Born Donna Marie Theresa Air on August 2, 1979 in Wallsend, England, to parents Marie and Trevor Air, she attended St Oswald’s Catholic Primary School in Gosforth and Sacred Heart Convent School on Fenham Hall Drive, in Newcastle upon Tyne. She graduated from Gosforth Academy. She started her career at the age of ten on the CBBC series Byker Grove. She was in a long-term relationship with multi-millionaire Damian Aspinall, with whom she had a daughter named Freya Air Aspinall. From 2013 to 2018, she dated James Middleton.

When you work and earn money as a child, you need to be confident, but it can make you a bit precocious, and I think I was a bit of a pain for a while when I was young.

I’ve never deprived myself of anything. I’ve always thought if you need to lose weight, carry on eating what you like, just eat less. I don’t agree with doing without pasta or bread; it’s too harsh.

I am partial to a cartwheel or two. It’s the way to go; I’ll be doing them in my 50s, hopefully.

I’ve spent a lot on clothes. I’m not kidding when I say I could have bought several country homes with the money. I’ve also given a lot away over time. I had a lovely Yves Saint Laurent jacket that I’d only worn once or twice, but I’m one for spring cleaning rather than storing my clothes.

My look is relaxed, and while I love fashion, I don’t obsess about it. I don’t have set rules when it comes to dressing, and I don’t mind where my clothes are from.