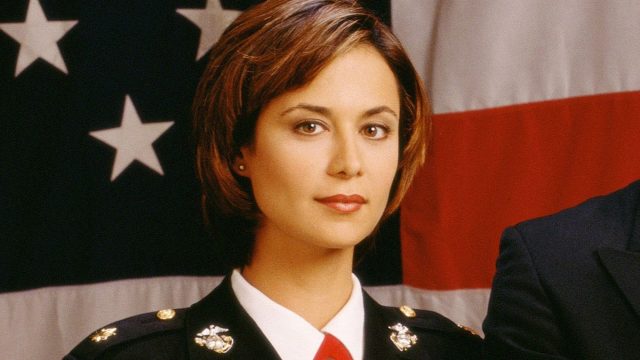 Catherine Bell’s height and other measurements are visible in the table below. Check it out!

Short Bio
Catherine was born August 14, 1968 in London, England. She has mixed Iranian and Scottish ancestry. When she was only two years old, her mother moved with her to the USA. Young Catherine started her career as a model but soon switched to acting. In 1996, Bell began her probably most famous role as Lieutenant Colonel Sarah MacKenzie from the JAG series. Her not so publicly known TV series role is character of Cat from Hot Line. Bell appears here topless in some provocative scenes.

The main prank that we play with props is for people’s birthdays. The special effects people will put a little explosive in the cake so it blows up in their face – that’s always fun to play on a guest star, or one of the trainees or someone who’s new.

I didn’t figure out the makeup or cute hair or clothes until oh, maybe my junior year of high school.

I started acting when I was about 18. I was a model for a couple of years before that.

Probably right at the end of JAG, I would love to have a child or two. I ultimately want to have two kids.

I think my uncle was probably the biggest influence in my life. We grew up in the same house, and he was just a really great, hard-working, honest, ethical person.