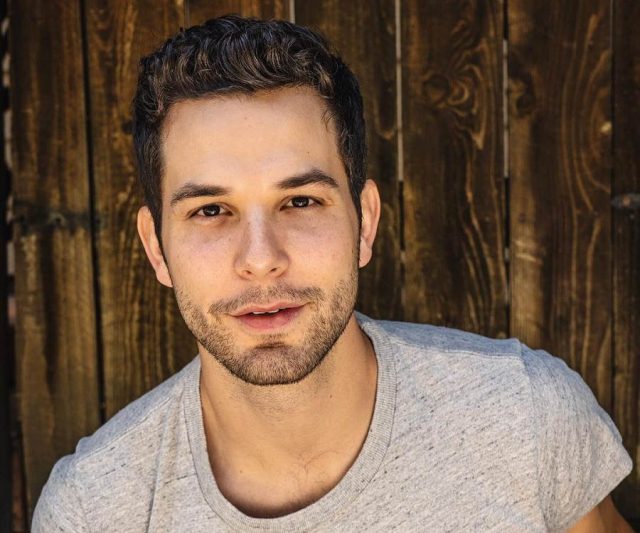 Skylar Astin’s height and other measurements are visible in the table below. Check it out!

Skylar Astin is an American actor, voice actor, model and singer who originated the role of Georg Zirschnitz in the 2006 Broadway musical Spring Awakening and portrayed Jesse Swanson in the musical films Pitch Perfect and Pitch Perfect 2. Astin is also known for his roles in television, such as Ground Floor, Halt and Catch Fire, Graves, and Crazy Ex-Girlfriend, and in the films Hamlet 2, Cavemen, Taking Woodstock, and the 2013 21 & Over. He has also done voice work in Wreck-It Ralph (as Roy), Monkey Up (as Monty), Trolls: The Beat Goes On! (as Branch), and Vampirina (as Frankenstein). Born Skylar Astin Lipstein on September 23, 1987 in New York City, New York, to parents Meryl and Barry Lipstein, he was raised in New City, New York, in Rockland County. He has a sister named Brielle and two brothers named Jace and Milan. After graduating from Clarkstown High School North, he attended Stagedoor Manor performing arts summer camp. He also attended the Tisch School of the Arts at New York University. In 2016, he married his girlfriend of 3 years, Anna Camp. On April 19, 2019, they announced that they have amicably separated.

There are definitely times where I am listening to the radio, and I think, ‘That would be awesome. I would love to sing that.’ It’s this weird karaoke fantasy that I might someday get to live out on the big screen.

The 1990s, in New York at least, were all about who could have the baggiest pants, and I definitely got swept up in that fad. Luckily, it didn’t last long – but I’ve made sure that my pants fit ever since.

My introduction to acting was through theatre, so I actually saw a couple of Broadway shows that made me want to be an actor.

A lot of times, actors and directors don’t want to repeat something. I don’t think we’re repeating something, but I think there’s certainly a genre that we’re in, and we’re happy to embrace it.

I don’t believe in pick-up lines because I’ve always been very comfortable in my own skin.