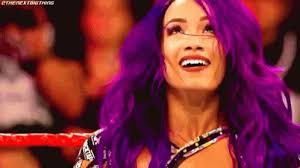 Sasha Banks’ bra size and other measurements are visible in the table below. Check it out!

Sasha was born on January 26th, 1992 in Fairfield, California as Mercedes Kaestner-Varnado. Her family moved a lot to accommodate special needs of her disabled brother. Banks’ ancestry is German and African-American. She started early with professional wrestling and studied online in order to save time. Sasha joined WWE in 2012. Her previous nicknames were Miss Mercedes and Mercedes KV. Fun fact: she’s a cousin of Snoop Dogg.

First-ever woman to have an iron-man match. It’s been such a long time, to be the second woman ever to main event a Raw.

When you have little girls bringing you your action figures for you to sign, it’s like, ‘Wow, things are happening, and dreams do come true.’

When I was 12, I was living in Iowa, and I emailed so many wrestling schools, and one of them was actually in Boston. I joined it at 18 – the New England Pro Wrestling Academy. They were doing a fantasy camp. I was 17 about to turn 18. I told my mom, ‘I’m 18 now. I just signed these papers by myself, and I’m going to do this.’

It’s really cool to see how many people try to imitate me or wear my stuff. I get a lot of Instagram videos of people doing my entrance. I think that’s so cool. To see the variety of people, little girls, guys, doing it. I never really thought that would happen. It’s amazing.