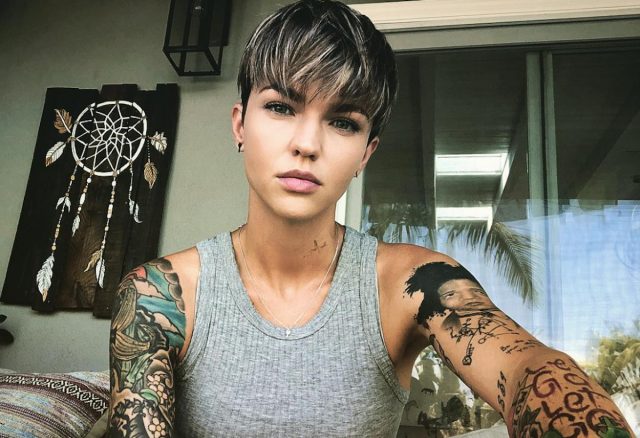 Ruby Rose’s weight and other measurements are visible in the table below. Check it out!

Ruby Rose is an Australian model, actress, and television presenter who gained recognition as a presenter on MTV Australia, followed by several high-profile modelling gigs, notably as the face of Maybelline New York in Australia. She also co-hosted Australia’s Next Top Model (2009) and The Project on Network Ten (2009–2011). As an actress, Rose is known for her role as Stella in Orange Is the New Black. She has also played prominent roles in the action movies Resident Evil: The Final Chapter, XXX: Return of Xander Cage and John Wick: Chapter 2 and has co-starred in the musical comedy Pitch Perfect 3 and the monster movie The Meg. She was cast as the title character in the first season of the CW television series Batwoman (2019–20). Rose released her debut single “Guilty Pleasure” with Gary Go, in January 2012. Born Ruby Rose Langenheim on March 20, 1986 in Melbourne, Australia, her mother Katia Langenheim was a single parent. She was educated at University High School and Footscray City College. Rose first gained attention after finishing as runner-up in the 2002 Girlfriend Magazine Model Search. She has dated Catherine McNeil, Phoebe Dahl, and Jessica Origliasso.

I started off as an Australian model. I had so many knockbacks, having short hair and being rejected, and I always thought: I’m never gonna get to where I want to get unless I start looking more feminine.

My mum used to wear the guys’ Chesty Bonds tanks, and I used to end up wearing them after she’d finish with them. She’s a painter, and they would be covered in paint splatters. She would wear them and wear them until they were super-soft, and then I’d get them. But I was just a kid, so they were like a dress on me.

Gender fluidity is not really feeling like you’re at one end of the spectrum or the other. For the most part, I definitely don’t identify as any gender. I’m not a guy; I don’t really feel like a woman, but obviously I was born one. So, I’m somewhere in the middle, which – in my perfect imagination – is like having the best of both sexes.

My mom has really great skin; my dad has really good skin. I don’t feel like I have to do a lot of work in regards to that.

I got to host a radio show. I got a clothing range. I was the face of fashion week. I got to do a whole television show with kids.