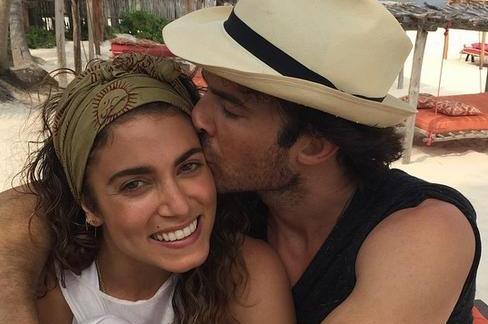 Nikki Reed’s height and other measurements are visible in the table below. Check it out!

Nikki was born May 17, 1988 in West Los Angeles into a family of a beautician and a set designer. Her ancestry is Jewish, Italian, and Cherokee. Reed studied at Alexander Hamilton High School for a while but dropped out and continued her education through homeschooling. In 2011, Nikki started dating American Idol contestant Paul McDonald. The couple married later the same year. However, they filed for divorce in 2014. Even before the divorce was finalized, Reed had already a new boyfriend, Ian Somerhalder. In 2015, the surprised their fans with wedding. So Nikky is once again off the market.

My boyfriend, who I love to death – he’s only 17 so he’s the youngest guy I’ve ever dated – he just moved here from Hawaii to be with me and I met him when I was 10. Anyway, in Hawaii they have such a different mentality and different priorities.

Having people wait outside of my house sort of gives me a panic attack. I’m a believer in the concept that people should not be followed and photographed everywhere.

The frenzy of the little-girl culture is something very unique, and I can only say that because I was one. The obsession – I can’t really explain it. Everything is heightened to the maximum.

I’m just a believer in keeping all of the creative brain cells moving and working even when you’re not working because the inevitable loneliness and boring drought in the actor’s world, it can eat you alive.