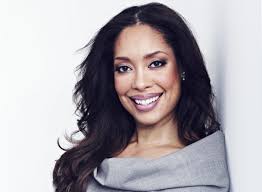 Gina Torres’ bra size and other measurements are visible in the table below. Check it out!

Gina was born April 25, 1969 in Manhattan, New York. She’s married to a famous actor Laurence Fishburne since 2002. They have one kid. Torres had smaller roles on various sci-fi and fantasy shows, such as Xena: Warrior Princess, Angel, The Vampire Diaries. She became famous as Zoe on Firefly and Jessica Pearson on Suits. In 2015, Gina is starring as Natalie on new TV series Revenge.

I love the chess game that I do on ‘Suits.’ I just love every bit of it and that I get to do it.

When it was announced that I was going to be on ‘Castle,’ there were immediate messages on all the TV news sites from ‘Firefly’ fans hoping for a nod to the series – some encrypted business just for them! I can’t promise that, but I can say that a few people out there might get a thrill.