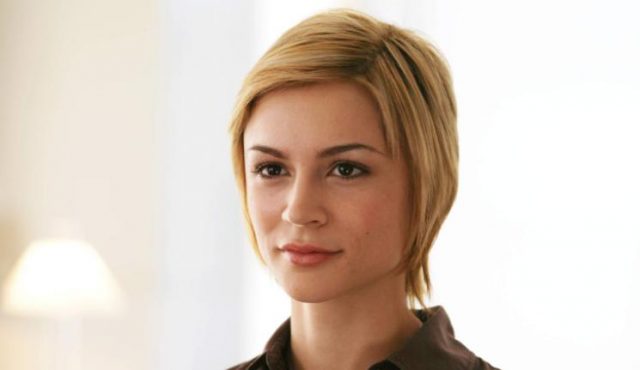 Samaire Armstrong’s height and other measurements are visible in the table below. Check it out!

Samaire Armstrong is an American actress, fashion designer and model born in Tokyo, Japan. She is best known for television roles such as Anna Stern in The O.C., Emily in Entourage, Juliet Darling in Dirty Sexy Money, Summer Edgecombe in The Mentalist, Elaine Richards in Resurrection, as well as film roles such as Abigail in Stay Alive, Kara Fratelli in Not Another Teen Movie, Nell Bedworth in It’s a Boy Girl Thing, Jen Robbins in My Santa, and Brooke in Windsor Drive. Born Samaire Rhys Armstrong on October 31, 1980 in Tokyo, Japan, to parents Sylvia Sepielli and Hunter Armstrong, she is of Scottish descent on her father’s side, and of Italian descent on her mother’s side. Samaire spent most of her growing years in Japan, Hawaii, Malaysia and China. She graduated from Sedona Red Rock High School. She also attended the University of Arizona for a year to major in costume design and theater but left after a year. With her ex-boyfriend, Jason Christopher, she has a son named Calin.

I don’t think anyone’s made a videogame yet that is me as the target audience.

I’ve spent most of my life doing some sort of exercise, but I’ve learned to never push myself into doing it. I know that when I am up for it I will, and when I’m not in the mood to, I don’t make myself feel badly over it.

I usually just dress myself. I typically make something or buy something and fix it up. I really like to spend my money on accessories like bags, shoes, belts. I don’t really spend on things I can make.

My family is heavily involved in the Marines and close-combat training, and I was raised doing Japanese sword training, so I’ve always been of the mentality that you have to be able to defend yourself.